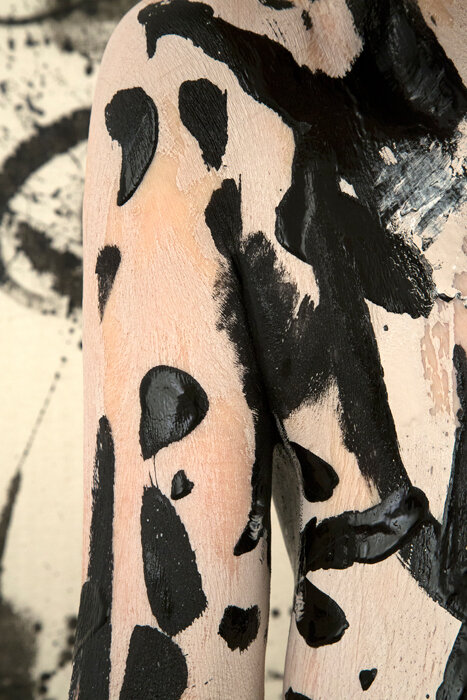 Katy Martin is a visual artist whose work combines painting, photography and performance. She also makes film and video. Her work has been exhibited at Galerie Arnaud Lefebvre and Light Cone (Paris); Fergus McCaffrey Gallery (Tokyo and New York); The Museum of Modern Art, Anthology Film Archives, Saint Peter’s Church, The Clemente, PPOW Gallery, and The Tribeca Film Festival (New York); Alexander/Heath Contemporary (Virginia); The Harvard Art Museums (Boston); GalerieForum Am Meer (Berlin); Green Dog Arts (Belfast); and The Art Museum of Shanghai University. In addition, her art has been featured in the journal, Katalog, and Bomb Magazine. Awards include a residency in the Chinese painting department at Shanghai University, a film preservation by Anthology Film Archives, and a fellowship from the National Endowment for the Arts.

Long-term collaborations include performance projects with three Paris artists (since 2012), a weekly photo exchange with a Berlin artist (since 2011) and curatorial projects with a Shanghai film curator (2005-2010).

Katy has an in-depth interest in Chinese painting. For her, it’s been a way to open up gestural abstraction. She first traveled to China, in 2005, to show her films at the Shanghai Duolun Museum. Between 2005-2010, working in collaboration with a Shanghai film curator, she programmed American film/video in China (at MoCA Shanghai), was a regular contributor to a leading Chinese art magazine (Yishu Shijie), and curated Chinese media art in the USA (at Thomas Erben Gallery and Anthology Film Archives). In 2016, she was an artist-in-residence at Shanghai University.

In 2008, through Artists Exchange International, Katy was invited by the Metropolitan Museum of Art to create a new work based on an object in its collection. She chose Fish and Rocks by the 17th century Chinese painter, Bada Shanren, and she’s been influenced by his art ever since.

Also, between 1978-1981, she made two films about Jasper Johns and the silkscreen print process. The films have shown widely and interview on the soundtrack has been published several times. What’s stayed with Katy as an influence is this. Jasper uses one art form to open up another, for example by using strategies that are better suited to printmaking to make his paintings. Katy’s art has developed as a hybrid form where painting takes place within the context of photography, and performance allows for the act of painting.

Katy Martin paints on her own skin, which she then photographs and prints on cotton rag paper. She also makes large-scale paintings with her body, by dipping her torso into liquid paint and rubbing it down the side of the canvas. Her exhibition will feature recent photographs and paintings plus a live performance, Movement Is a Mark, where she creates a new painting.

All of Katy’s art explores painting as a gesture. Her new work homes in on the choreography that implies. For the large paintings, she moves in repeating patterns across the canvas. The body imprints are like brush strokes but they’re also a trace, a remnant of the artist in that time and place.

Painting her own body and performing for the camera builds on the logic of action painting. It also makes literal the notion of presence in the marks. What emerges is a paradox of the art-making process, where you’re subject and object, but it’s not about you. Rather, it’s a process of finding and losing. Presence implies absence. You’re there but not there.

"I plan to show photographs and a large painting on canvas. I will also do a performance, "Movement Is a Mark", where I create a new painting in the exhibition space. All my work centers around painting as performance, as an act that brings with it the artist’s whole body.

My photographs involve a performance for the camera. I paint directly on my skin, and then photograph myself, and then I print this on cotton rag paper. In the final images, my body isn’t exactly visible. It’s there, but not there, as the painting takes over.

My canvases also begin with a performative process. I dip my shoulder and arms into liquid paint and then rub them down the side of the canvas. It’s a simple movement that I repeat across the surface. I’m looking for a sense of rhythm in the marks.

In Chinese painting, it’s not so much the marks you look at, as the way the energy moves around those marks. That space is empty, empty but full. If I think of my big marks as traces of myself, then maybe what I’m doing is emptying out. I'm looking for what happens in the flow around me – and seeing painting as a dynamic, a form of energy, a “Movement Score.”