Live Performance:"Movement Is a Mark" 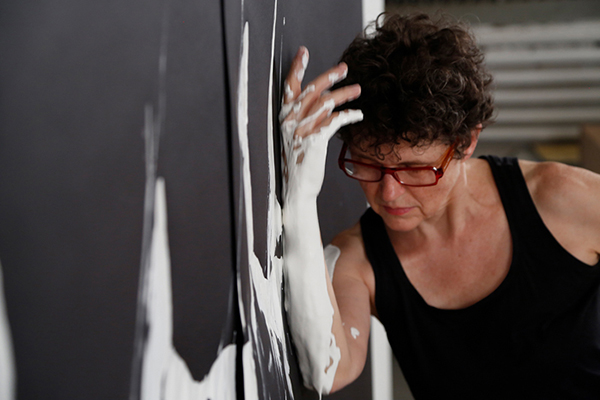 Katy Martin is a visual artist whose work combines painting, photography and performance. She also makes film and video. Her art, paint on skin, is about the fluidity of borders, and skin itself as a porous boundary that continually shifts and changes.

Katy paints directly on her skin, then photograph and print out digitally. The final images exist as digital prints on cotton rag paper. For years, she has been investigating gesture in painting and this implicates her whole body. The imagery plays on illusions of control – about our bodies and also about art. She started this work more than twenty years ago as a way to find herself, literally, within the language of abstraction and reshape it based on her own experience.

She uses the camera to record evidence of movement, which she thinks about in relation to gesture. It’s all part of continuing attempt to locate herself within shifting contexts. That sense of dislocation and change is perhaps why her work is a hybrid form, one that combines painting, photography and performance. Painting and photography set up different expectations and she seeks the ambiguities in each.

Since 2017, she creates a big painting on paper or canvas, then I set up the camera, stand in front of that painting, and paint on herself as if she's just another compositional element. By doing that process, she is both appearing and disappearing into marks.

Katy has an in-depth interest in Chinese painting. For her, it’s been a way to open up gestural abstraction. She first traveled to China, in 2005, to show her films at the Shanghai Duolun Museum. Between 2005-2010, working in collaboration with a Shanghai film curator, she programmed American film/video in China (at MoCA Shanghai), was a regular contributor to a leading Chinese art magazine (Yishu Shijie), and curated Chinese media art in the USA (at Thomas Erben Gallery and Anthology Film Archives).

In 2008, through Artists Exchange International, Katy was invited by the Metropolitan Museum of Art to create a new work based on an object in its collection. She chose “Fish and Rocks” by the Chinese painter, Bada Shanren, and she’s been influenced by his art ever since.

Also, between 1978-1981, she made two films about Jasper Johns and the silkscreen print process. The films have shown widely and interview on the soundtrack has been published several times. What’s stayed with Katy as an influence is this. Jasper uses one art form to open up another, for example by using strategies that are better suited to printmaking to make his paintings. Katy’s art has developed as a hybrid form where painting takes place within the context of photography, and performance allows for the act of painting.

In 1974, Katy wrote an analysis of the puns in Marcel Duchamp’s film, Anémic-Cinéma, that was published in Studio International (London). Her work has been exhibited at Galerie Arnaud Lefebvre and Light Cone (Paris); The Museum of Modern Art, Anthology Film Archives, Saint Peter’s Church, The Clemente, PPOW Gallery, and The Tribeca Film Festival (New York); Alexander/Heath Contemporary (Virginia); The Harvard Art Museums (Boston); GalerieForum Am Meer (Berlin); Green Dog Arts (Belfast); and The Shanghai Duolun Museum of Modern Art and The Art Museum of Shanghai University. In addition, her art has been featured in the journal, Katalog, and Bomb Magazine. Awards include a residency in the Chinese painting department at Shanghai University, a film preservation by Anthology Film Archives, and a fellowship from the National Endowment for the Arts.

Long-term collaborations include performance projects with three Paris artists (since 2012), a weekly photo exchange with a Berlin artist (since 2011) and curatorial projects with a Shanghai film curator (2005-2010). 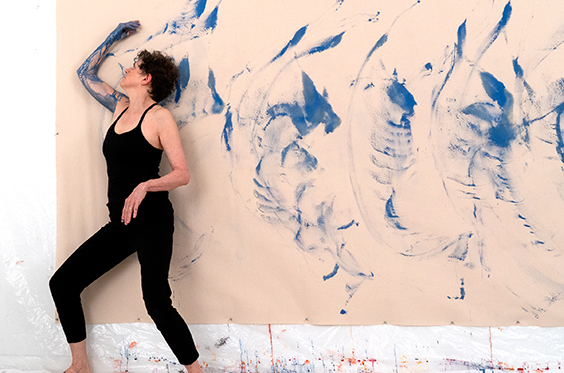 In her performance, Katy Martin will create a new painting, using her body instead of a brush to apply paint to the canvas.

Think of it as calligraphy or writing, which in Chinese tradition is an active, physical, and repetitive practice. Cosmic energy, or qi, comes down through the body and out through the hand and brush. What Katy is doing is to eliminate the hand and brush. As a visual score, Katy’s paintings could indicate music or dance. As a live performance, they become a theatrical form. There are three basic elements – the canvas on the wall, the tray of paint on the floor, and the painter/performer moving in between. She is looking for a sense of rhythm in the marks. Between each, she crouches down and centers herself before reaching up and leaving another trace.