Sky Pape is a Canadian-born artist living in NYC. Known for abstract works on and of paper. Pape has exhibited widely in gallery and museum shows for over thirty-five years. Her work is in museum, corporate, and private collections internationally, including the Museum of Modern Art, the Solomon R. Guggenheim Museum, the Brooklyn Museum of Art, and the National Museum of Women in the Arts. Among Pape’s honors and awards are grants from the Pollock-Krasner Foundation, the Canada Council for the Arts, the E.D. Foundation, the Ruth and Harold Chenven Foundation, the Northern Manhattan Arts Alliance, a City Artist Corps grant from New York Foundation for the Arts (NYFA) and NYC Department of Cultural Affairs, fully-funded residency fellowships in Italy from the Rockefeller Foundation and the Bogliasco Foundation, and in New York from the Swimming Hole Foundation. Published reviews of Pape’s work include The New York Times, ARTnews, Art & Antiques, and more. She is represented by June Kelly Gallery in New York City.

For fourteen years, Pape maintained a parallel career in scientific research, primarily in the fields of schizophrenia, genetics and traumatic brain injury. Her interest in the sciences continues to inform her work.

Sky Pape’s many bodies of work feature the interplay between the intentional and unexpected, evoking ambiguously familiar elements and forces. She has experimented extensively with water and ink, developing novel techniques that highlight irregularities in rational systems of implied order, and the dynamic coexistence of dissimilar entities.

This exhibition, Increments & Incidents presents recent pieces from the artist’s Anomalies series, with sources of inspiration ranging from dinner plates to astrophysics. Using geometry and patterns, Pape references systems that operate within us, and those within which we exist, addressing themes of perception and uncertainty. Pulsating with irregularities, the human hand is always evident in these structured, intricate compositions. “I’m fascinated by the leaps the mind makes when confronted by something that’s a little off, creating a space for unexpected realizations to arise,” she says. 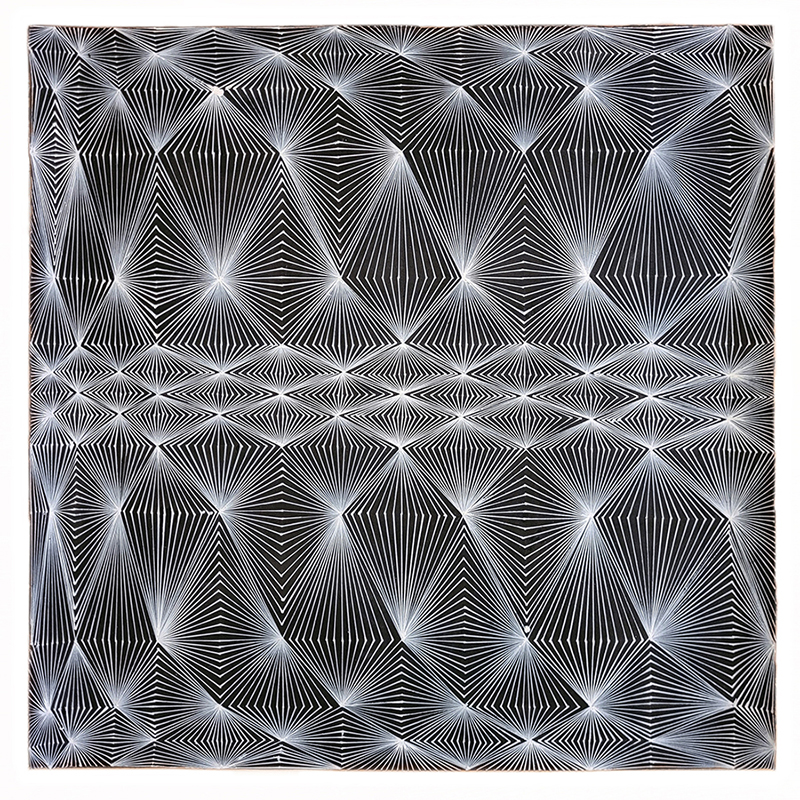 “Geometry and patterns figure largely in our interpretation of the universe through our senses, science, and cultures, and I’m intrigued by their appearance in everyday life: clothing, buildings, infrastructure, technology, and the nature and creatures found in every place. All of these serve as idea resources for me.”

“My Anomalies series relates, in part, to concerns of instability and resilience. Irregularities occur in both natural and constructed systems, and indeed, the persistence of much life hangs on quirks that some might call flaws. While I make a piece, irregularities in the structure reveal to me something about perceptive tolerance thresholds for nonconformity or corruption within an accepted pattern – such anomalies offering me some clues for contending with deeply problematic or mystifying systems. Because I’m not one to just ignore an alluring clue, this language of curiosity leads me to recognize connections where I had barely sensed they existed, a most thrilling aspect of what I do.”