A Conversation with the Artist John Fekner

John Fekner is a street and multimedia artist, who created hundreds of environmental, social, political, and conceptual works consisting of stenciled words, symbols, dates, and icons painted outdoors around the world. Since 1968, Fekner has addressed issues involving concepts of perception and transformation, as well as specific environmental and sociological concerns such as urban decay, greed, chemical pollution, mass media, and tributes to North America Indigenous Peoples.

John Fekner is one of the pioneering and major artists of urban art. Choosing stencil as his favorite tool in the late 60s to produce in situ work based on texts painted on walls, he is known for his hundreds of political interventions in New York. Contemporary of the beginnings of graffiti and Keith Haring, John Fekner is close to his work in the political dimension and the highlighting of minorities, but distances himself from it by swapping the pop dimension for a raw and frontal aesthetic, and by choosing the places of intervention for what they are (the Bronx, abandoned and post-industrial areas, rusty cars) and not for their media character (subway tunnels, arty neighborhoods). He has never stopped to be involved with local communities and minorities, defending their rights, but also with young artists with whom he still collaborates today.

During the talk, he will discuss the process and the idea behind the book 'MEMORY' presented in this exhibition.

This publication 'MEMORY' gathers 6 objects edited by projects: a parcel memory from the artist’s archives. It is the result of exchanges between the artists John Fekner and Brad Downey, the artistic director of the Bien Urbain festival David Demougeot and the graphic designers Laura Bouchez and Bart Lanzini. 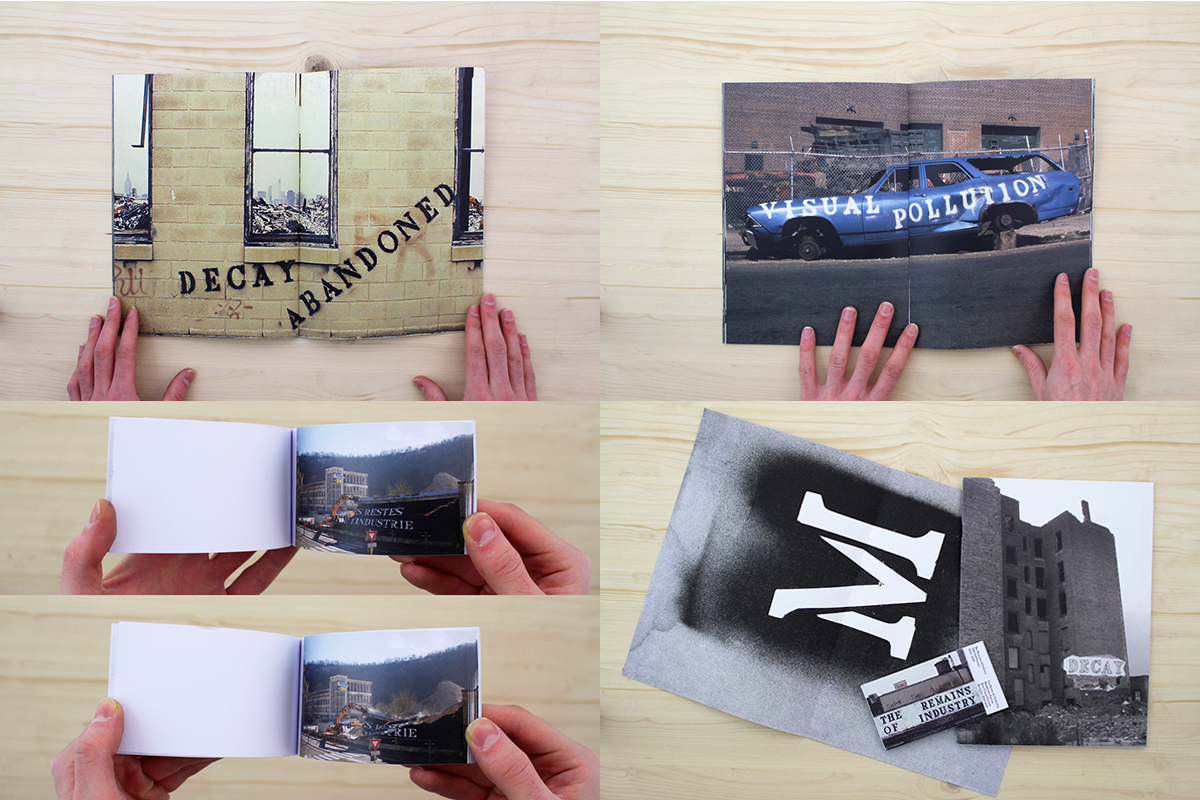 The object was finalized, silkscreened, risographed, laser printed and hand crafted by Bart Lanzini, assisted by volunteers at the Atelier Superseñor during Bien Urbain 2019.

The photographs are by John Fekner, Martha Cooper and Elisa Murcia-Artengo.

1. THE REMAINS OF INDUSTRY takes the shape of a flip book of colour photos whose cover represents the stencil made (then destroyed) on the Trunz Factoryin New York in 1979. The interior unfolds the destruction of the French version : Les restes de l’industrie, made in Besançon on the Rhodiaceta factory being demolished. This painting done during the Bien Urbain 2018 festival echoed the 50th anniversary of May 68 : the Rhodiaceta strike in 1967 was considered by many to be one of the triggers of the workers movement and then of the general strike of 68, while John began his artistic interventions in the public space in New York.

2. The best known and invasive is the DECAY (rot) series, 5 letters painted on the post-industrial ruins of New York in the years 1978 to 1983: factories, car bodies, etc. A selection of colour photos by the artist and a poem by John Fekner and James Recchione are grouped together in a 40-page booklet with a hand-cut cover.

3. SAVE OUR SCHOOL! consists of three leporellos comprising 12 colour photos, a poem by Don Leicht and a text contextualizing and documenting John Fekner’s inscriptions (FALSAS PROMESAS, BROKEN PROMISES, SAVE OUR SCHOOL!, LAST HOPE, BROKEN TREATIES) and Don Leicht’s intervention (installation of bird feeders with neighbourhood children) in Charlotte Street in the South Bronx in 1980.

4. MORTAL WOUND is a fake contact sheet of 7 black and white photographs and a poem by John Fekner, about his intervention in St James Church being demolished in Newark, New Jersey.

5.MEMORY is a photograph of Martha Cooper from a wall stencil by John Fekner.

6. 'M' is a poster reproducing the traces of paint on the artist’s stencil tool.

Our copies of the Memory folder are sold out but please check the Bien Urbain webshop in France to check availability.