Frances Hynes' Solo Exhibition
'Then and Now: The Shape and Line of Home' 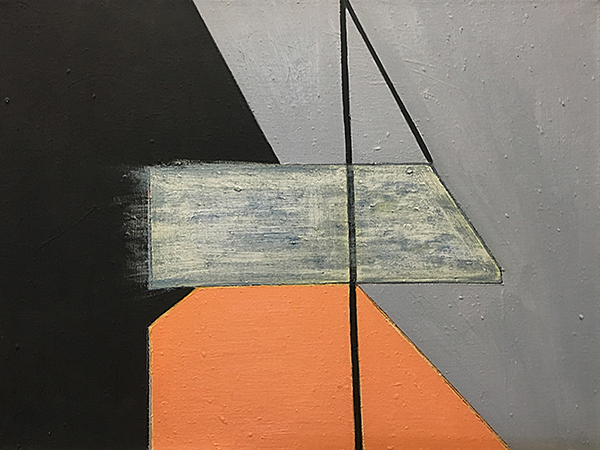 Frances Hynes participated in the National Workspace Program at PS 1 Contemporary Art Center, now called MoMA PS1 from 1976 to 1978. This introduction to Long Island City, Queens, NY, and the need for studio space for visual artists led to the founding of Independent Studios 1, a cooperative workspace for artists, in Long Island City, her studio for the next 38 years. Hynes taught at LaGuardia Community College in 1980 and from 1998 until 2013. Her working career in Queens also includes serving as Visual Arts Director at Flushing Arts Council, Flushing Town Hall from 1985 to 1995.

Frances Hynes received an MA from New York University and a BA from St. John’s University. She also studied at the Art Students League in Woodstock, NY, and the Academy of Fine Arts in Florence, Italy.

She has a lengthy exhibition history beginning with the 1974 New Talent Festival, sponsored by eighteen New York galleries to provide venues for unknown artists. Poindexter Gallery participated and introduced her paintings. A solo exhibition at Poindexter Gallery followed. Since then she has had over forty solo exhibitions. These include The Institute for Contemporary Art, P.S.1 (now called MoMA PS1) in Long Island City, NY, and seven solo shows at Terry Dintenfass Gallery, New York. Other museum exhibitions include New Britain Museum of American Art, CT; Springfield Museum of Art, OH; Wright Museum of Art, Beloit, WI; Jacksonville Museum of Contemporary Art, FL; and a 10-year survey at Ogunquit Museum of American Art, ME. FRANCES HYNES: CONSTELLATIONS is currently at the Hudson River Museum, YONKERS, NY - January 2020 – 2021.

The artist also had seven solo exhibitions with June Kelly Gallery, New York beginning in 1991. A one-person show of watercolors, All Kinds of Weather was presented at Phyllis Stigliano Gallery, Brooklyn, NY in cooperation with the June Kelly Gallery in 2010. Animal Works: paintings from the early 1980s was presented by Phyllis Stigliano Art Projects at Moe’s Meat Market, a gallery in 2015. A catalog was produced and six of these paintings were placed in museum collections.

She was awarded a National Endowment for the Arts Grant for her painting and the Edwin Palmer Prize for Painting from the National Academy of Design. Hynes was a resident artist at the Tyrone Guthrie Centre and the Cill Rialaig Project both in Ireland, Edna St. Vincent Millay Colony, Austerlitz, NY, and others. She has served as a visiting artist/professor at Burren College of Art, County Clare, Ireland; Lahti Institute of Fine Arts, Finland; Memphis College of Art; Central Michigan University, Savannah College of Art and Design and Illinois State University among others.

In the 1970s and 1980s, Frances Hynes made paintings of the simple, New England Cape Cod style, wood-frame, and clapboard houses of her neighborhood. During these years she also found the barns of upstate NY to be an inspiration. And some paintings referenced the functional, plain factory buildings and sheds she saw in Long Island City, NY, the location of her studio for 40 years (1976 - 2016).

This exhibition showcases seven early paintings and one sculpture by Frances Hynes along with four current pieces. They allude to buildings that Hynes might pass during any day in the Queens County of the 1970s and 1980s. But the paintings have become minimal and abstract. The images have been edited, pared-down, and reduced – the building image sometimes recognizable, sometimes a challenge for the viewer to decipher and puzzle out.

Here is an artist who finds ideas for painting in the neighborhood sites we pass each day. The paintings may hint at something utopian and abstract, yet the shapes and lines in Hynes’ paintings surround us. They are not too distanced from our daily views of windows and doorways, yet they suggest concepts of duality and transition: here/there, past/present, entry/exit, and inside/outside.

Looking carefully at these works the viewer may see pentimento, evidence of changes made during the painting process or traces of forgotten colors beneath the final layer of paint on the canvas. Here we see an artist who is curious about changing the position of shape and line during the painting process and these shifts and repetitions become metaphor, perhaps suggesting the ongoing and continuous movement of life around us. 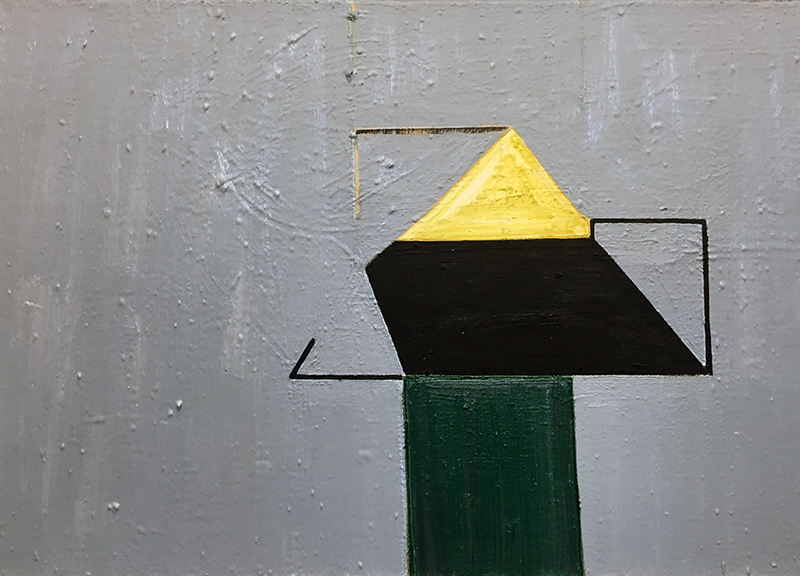 "Seven paintings in this exhibition date from 1979 – 88. The horizontal and vertical structure of architecture remains constant in my paintings. My current work painted in 2019-2020 are also included in this exhibition. As you can see, it reintroduced and joined architectural and landscape imagery in bright and airy mood."

“I grew up in Bayside, Queens when this locale was transforming from a rural place to a more suburban one of single-family homes. The Garage Art Center is an innovative and creative venture contributing to the visual arts community of Queens and I am thrilled to be exhibiting at this new venue in Bayside.”